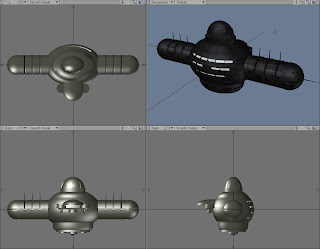 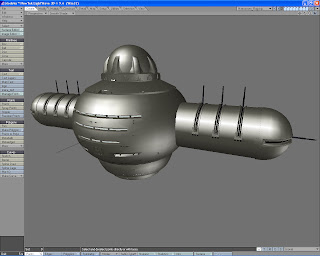 I finally decided to get back to working on the Harkonnen frigate over the weekend. I had started it some time ago, but really only had the basic shapes done.
Now with the blueprints I have really been able to get into it!
I start by tracing the blueprints in Adobe Illustrator, then import that into Lightwave, where I can use it to construct the model more easily. So far I have redone the main body... next it's on to redoing the "wings".
I am going to point out that since this is the special edition, the model is also going to be for the special edition - which means it is NOT going to have the long tail section and IS going to be roughly similar in configuration to the Atreides and Emperor's frigates... My logic behind this change is that the Guild uses a standardized docking system in their Heighliners - therefore all ships are roughly the same shape (given some latitude for local deisgn preferences).
The second major change is going to be moving the unseen and unused "Thopter Launch Bays" from the tail of the frigate, to the underside of the "wings"... I think it will fit three thopters per side... but will have to wait until I get both ships to scale.
Posted by Sasha at 1:01 PM