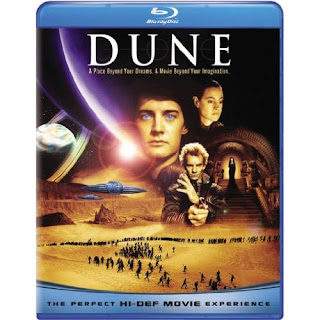 For those of you who are interested, the original theatrical version of Dune (including the horrible extended edition and a bunch of extras previously available on the last DVD release and the failed HD-DVD format) is coming to Blu-Ray on the 27th April 2010.
In fact I think it will just be a "port" of the HD-DVD version (The quality of which was apparently really good) with no new features... but who knows.
You can find it on Amazon here.
Posted by Sasha at 3:03 PM 5 comments: 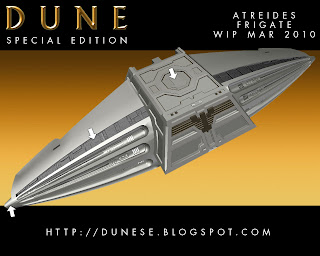 (Click image to enlarge)
Well, ever since Ron Miller sent Me the blueprints and some close up shots of one of the hero flying models (NOT the giant landed model), I have been meaning to get around to fixing up My model a bit.
Started tonight by trimming of the ends of the "wings" - they don't end in a point. Still have to model the "guns" that protrude from there though.
Also worked in the upper "trench" that I had previously missed, with similar detailing going on the back side of the wing section. (It looks different to the movie but I really don;t feel like trying to model that same insanely tiny random details)
After that, I started work redoing all the beveling work, beginning with the top section of the main hull. Have to do the sides and finally found a picture that has some of the detailing for the underside. Gonna try and get this done by the end of the week.
Posted by Sasha at 1:45 AM No comments:

Well now that I finally have enough hard drive space, and my the latest version of the editing software I am using will directly load .vob (DVD video files), I have been able to actually start editing the movie and cutting in my new visual effects.

I am using the DUNE: Third Stage Edition fanedit by PhineasBG and Nighthawks as a base since it contains all the deleted scenes though this edit also needs a good deal of tightening up in places.

The first thing I did was to replace the old 80's Universal logo with the current one since that was an easy fix and then add in my "Secret Report Within the Guild" shot.
I then moved the extended shot where Duke Leto talks to Duncan to a more sensible place (That allows for Duncan to be in the palace during the attack).
I am still trying to determine the best place for the discussion between Duke Leto and Thufir about what the locals called Paul - I was going to put it after the assassination attempt on Paul, but it may have to go elsewhere.
I recut the part where Alia attacks the Baron - the placing of the shot where she holds up the gom jabbar has always bothered me, so I moved to to directly after the Baron's reaction to being sliced, cutting his reaction into two. Also edited out the close up shot of Kyle MacLachlan "falling" down the cliff - that was always just a BAD effect.
Last night I went through and cut out all the effects shots and put them on a separate video track for easy identification - gonna be a lot of work - though obviously I am not going to replace every effect!!! LOL
Posted by Sasha at 10:59 AM No comments: 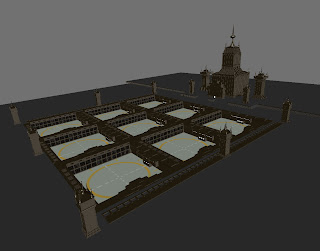 (Click image to enlarge)
I reworked the landing field in front of the palace and added the rocket jets to the Guild transport craft.
Here is a link to the current iteration of the animation, including a look at the original night time set shot.
I still have to match the lighting of the landing fields to the movie - a sort of greenish color - in order to match the subsequent shot.
http://www.youtube.com/watch?v=Bf8fyOzAXhQ
Posted by Sasha at 1:26 PM 1 comment:

(click image to enlarge)
Well, I now have a slightly faster computer with considerably more RAM and Hard Drive space and a direct X 10 graphics card, so hopefully some of the more complex animation setups are now more achievable!

To begin with, I decided I really needed to go and finish up the Emperor's Palace on Kaitain, since it is really the opening FX shot of the movie (Not counting all the intro stuff and the guild's secret report).

I am still working on finishing up the landing field and I have to work out what the heck the guild lander looks like - since it is as really odd shape and I only have a few references for it.

I am also playing around with time of day... all the exterior model shots seem to be set at night in the movie (Caladan Castle, Geidi Prime, Kaitain Palace), so I thought it might look better to try a few alternatives.
So for Kaitain I am trying out a sort of golden sunset kind of look - trying not to make it look too "starwarsy" though.
Posted by Sasha at 9:23 AM No comments:

Well, it's took 3 days to drive from Washington State to Los Angeles, and another week to get internet, but now I'm here looking for work!
Hope to be able to still schedule time to continue working on this project as well!
Just waiting on getting some RAM for a slightly faster PC which a friend loaned to Me so I can then set that up for 3D work and probably retire this old workhorse.
It would certainly help enable Me to complete some of the more ambitious scenes I have planned!