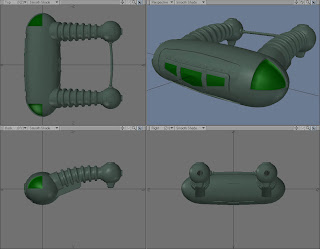 I rather like this interesting "bug-like" ornithopter, though I was never impressed by the stubby little wings on it.
This is the incomplete model of the movie 'thopter based on photos of a model kit. As Ron Miller the production artist was kind enough to send Me the blueprints, I will probably be reworking this quite considerably.
The Special Edition version will replace the round globe like "thrusters" at the end of each arm with a modified version that reflect the design established in the Special Edition version of the Atreides 'thopter, though with a distinctly Harkonnen flavor.
Posted by Sasha at 11:49 PM