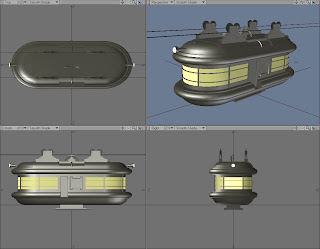 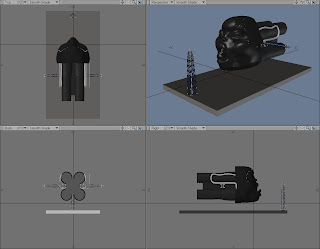 The introduction to Giedi Prime is another example of a scene where I think it could work just a bit better composition wise... I love the design of everything - very gothic/industrial, but the shots as edited in the theatrical edition are somewhat confusing and it really is incredibly dark... So I've built a model of the Harkonnen tram and have started work on the enormous "oil burners" - the giant cherub faces that spew black smoke, though I only have a few reference photos of them. Going to have to make up some of the detail there. The script describes this part of the surface of the planet as an ocean of black oil, so I think My general intention is just to set the scene a little better and give the audience a real sense of what this place is like. Eventually, I hope to make a lo-res Piter De Vries model to go in the tram, so you can see him in there.
Also need to model Harko City and possibly the landing pad from where Piter is coming (I imagine that the landing pads are far away across the ocean of oil to prevent the escape of an of the slave labor).
Posted by Sasha at 9:48 AM